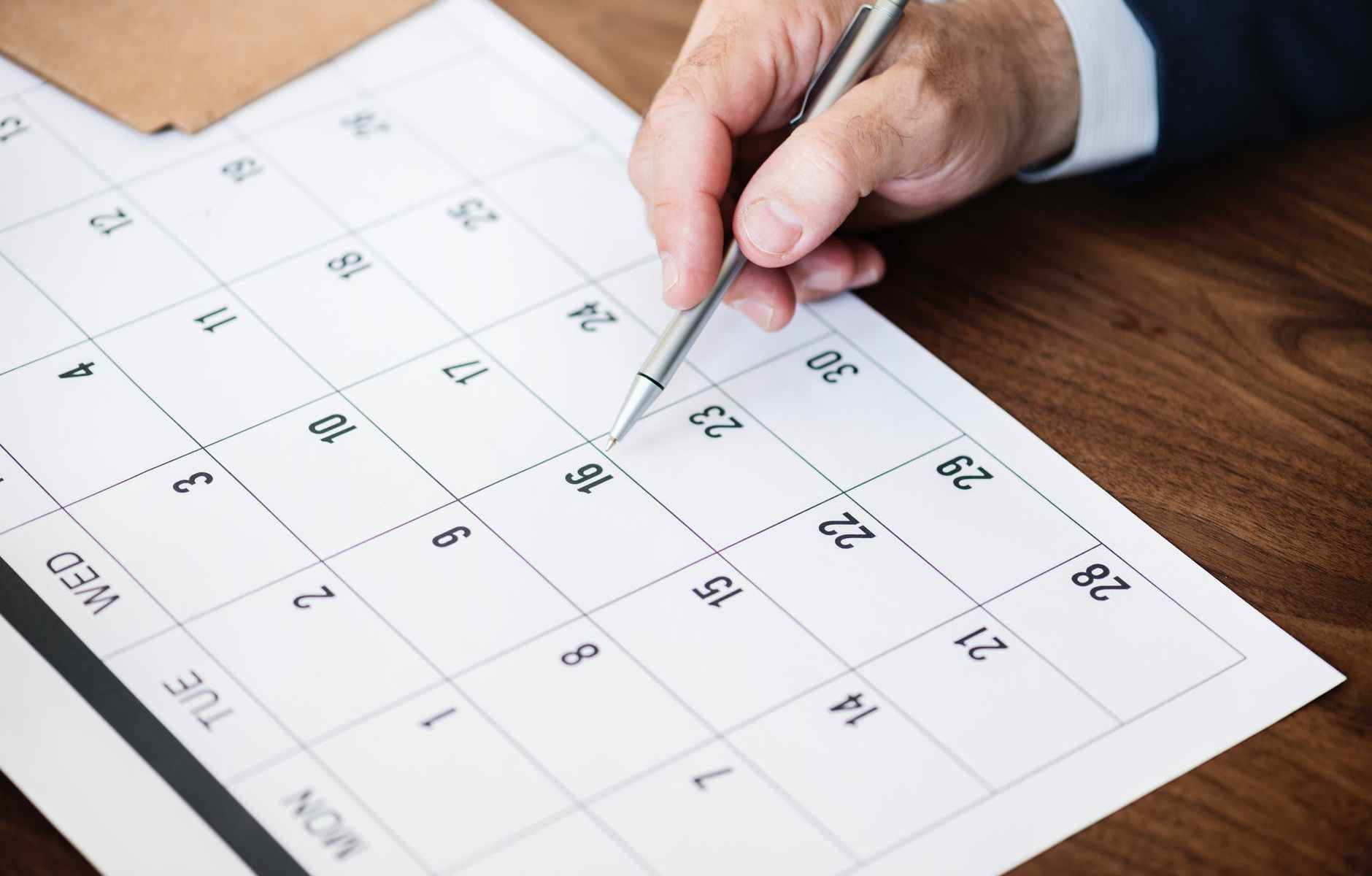 Our new weekly post – all our comments and views summarized and reviewed on a Monday morning.

With new added “pic of the week”.

Every week we will summarize our thoughts from the previous week, employing the following format;  What we thought (going into the week), What happened (during the week) and What changed for us. Enjoy……………………………….

After yet another tumultuous week,  our thoughts could be summarized as follows;

We thought there were several things to look for this week, arguably the last week to do anything in financial markets before the holiday freeze starts to take hold of market liquidity.

Initially we were wary of Monday’s market opening. After such an awful market response last week, one is tuned to the ticker as we re-open. We were optimistic markets would recover their poise.

Then we looked to  “the vote” on Tuesday . UK Parliamentarians get the chance to decide the fate of PM May’s withdrawal agreement – the “deal” and the fate of the PM too. From our perspective, we remained convinced the deal is unworkable, and as such will be voted down. Then we can see several paths, some quite unpleasant, all leading, like Roman roads, to a second referendum.

Then, we looked to the ECB meeting. We thought most have forgotten how significant the earlier meeting was 6 months ago – the last flight of the easy bee – and how it started the summer-long rise in major stock indices. This one is no the less important, as the ECB rubber stamps it’s already planned end to QE. Firstly, if as we expect, the ECB flag no willingness to raise interest rates before Draghi leaves next winter, markets will have dodged another inconvenient truth. But much more important is the reinvestment program, which in our minds, offered an opportunity to continue to support (in particular peripheral) markets –  discomforting to the bears, if not as comforting to the bulls.

The other big worry for markets, the “US/China trade war” as it’s called, also threw up it’s own twists and turns, with the Huawei executive arrested in Canada on behalf of US Justice Dept. We however stuck to our view that this is still kabuki, well choreographed WWF-style wrestling, designed to serve the domestic agenda of the two leaders. We looked to see racially how China responded diplomatically (looking for signs that Xi may not have minded after all) and what the impact would be on the trade negotiations.

All in all, we remained convinced that major stocks can just as easily ride a short squeeze to new highs as plummet 1987-style. Or in other words, a big rally remains as likely as a big sell off in risk.

For that reason we preferred the sidelines, feeling that risk taking is only for those with need rather than opportunity.

No let up – another very long week. These were the highlights for us.

China / us trade wars – the consensus continues to see “shots fired”, the latest being the arrest of the two “Canadians”, and markets continue to acknowledge that concern however see it differently. The diplomatic response (which we’d suggested bore watching, and would give clues) seemed to us to be of the moderate variety. Hardly worthy of “anger and aggression”. When one looks at the two poor unfortunate individuals, one was heavily involved with the Kim regime in North Korea, having played a key role in the Dennis Rodman visit, while the other had previously been a Canadian diplomat who was now working for an NGO that had no physical presence (and licence) in China, and “said to be working on a report on China’s relations with North Korea at the time of his detainment.”- see here.

Then when one looks at the second dimension we’d flagged – the actual progress on trade  – again one sees progress, we could see significant tariff “reductions” announced. In reality these are partial suspensions of the tariffs announced in the summer, rather than actual removal of original barriers to entry for US autos, but they come alongside fresh soybean purchases and without equivalent suspension of US tariffs. We’d describe these moves as more “ok mickey let’s say you won“.  The key point here is that the kabuki trade-spat is not harming either President, and is likely helping them “rough up” challengers at home as we’ve described recently.

Finally, this is a must read. We’ll let the reader decide whether it fits the “kabuki” agenda we have in mind. 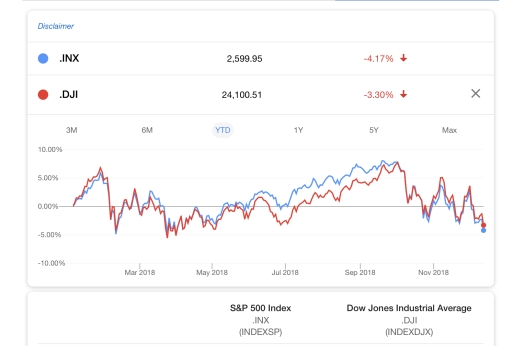 Up through the start of the week, back down at the end, the market may be cleaner (of stale weak positioning) by the end, but it remains in a ever-more precarious “chart” formation with moving averages and 1987-similarities stacking against it.

Data – most were focussed on a “strong Us Retail sales”, but with so much “trade war” talk around, perhaps Christmas shopping is coming early, lest we find toys (which are all made in China right?) unavailable. For us the interesting data is the CPI inflation data, and there was something for everyone. We’ve always looked at inflation in broadly four buckets, core goods, core services excluding rents, the shelter/rents portion and the volatile “ex’s” of Food and energy. These charts, courtesy of one of our favorite inflation followers Mike Ashton at Enduring, show the current story.

As Mike wrote, “No real reason to wrap this one up – the numbers speak for themselves. Despite the weakness in energy, which is killing the inflation markets (since energy is most of the volatility in headline inflation, to which TIPS and inflation swaps are tied), prices in general continue to rise and if anything seem to be gaining a little steam even outside of housing. Housing inflation isn’t likely to move very far in either direction for a while from the current level, so the next movement in core or median CPI is going to come from core-ex-shelter categories like Medical Care (possibly looking up), Apparel (quite heavy), and other core goods like autos.”  Can’t argue with any of that, but we would suggest that to us, US housing is under growing strain, and as such, we expect rents to at least peak out here. As such, we’re looking for lower core CPI numbers into the begining of the year, alongside the energy-related slide in headline CPI. That’s good news for a Fed that would like to pause soon. Whether they will, so far away from their desired “2.75%+” resting place, will depend upon how the asset markets and economy fare into the New Year. And if you haven’t signed up for Mike’s commentary, you should – here.

Bitcoin scammers – the end ? In a seriously underreported nationwide event, the mass-scam of hospitals and businesses with bomb hoaxes for bitcoin seems to us a major stem towards the natural conclusion for crypto-currencies – outlaw.

Brexit – recognising our error, we summarized our thoughts here. Having called the leadership challenge here, itself an non-consensus call, we were wrong on the outcome, expecting PM May to do the right thing. We should have taken then notice of Andy Serkis’s Gollum May, which turned out to spot on – it’s her Brexit or nothing. 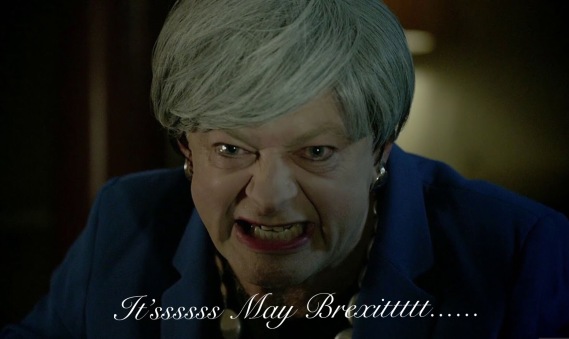 That said, we can now see a clearer endgame. Te alternatives to May’s deal have been sidelined if not buried, and it’s quickly becoming a menu of “my deal” or a second referendum. This is a pretty standard, but good, review of the “deal” side of the menu here.

However, we still feel the second referendum (#MeRef2) is very likely, and needs to be on any menu of outcomes. That said, when EU-acolyte Labour ex-PMs get involved, you’re forced to file May’s response under “She would say that wouldn’t she”;

“For Tony Blair to go to Brussels and seek to undermine our negotiations by advocating for a second referendum is an insult to the office he once held and the people he once served. We cannot, as he would, abdicate responsibility for this decision.” In other words, the denial makes us more convinced the UK Government is working out the details of a second referendum, albeit in the guise of a fall back to the fall out from the (irish) fall back. We doubt you’ll have to wait until the fall to see this, though it could require the fall of this government.

In a final staw for the “strawPM”, May’s trip around Europe yielded nothing, the amendments achieved by her appearing predictaby laughable – “never interupt your enemy 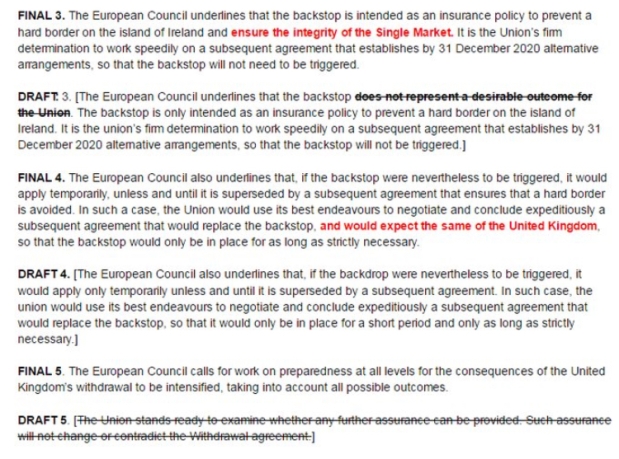 while they are busy making a mistake”. That said, the fake-WWF-arm-wrestling made almost as good a  photo-op as the “shut-in-the-back-of-he-limo” . Kabuki is infectious.

ECB – largely as expected, they hardly managed to make a wave in the media, and many will have failed to notice their announcements. As we described last week, we expect their actual intentions to be discovered over time, and the support the re-investment program will give to markets, much like that of the Fed, to ony become clear into next year. With French President Macron’s expensive white flag in the face of yellow jackets, and Italian budget beligerance,  European bond markets are sure to need continued support next year.

Market liquidity – as we mentioned last week, is set to become an issue, and we can already see uncomfortable developments here. While surely no one can remain unaware, just how treacherous the leveraged loan market has become, stories about excessive Japanese involvement adds to the negative mood. With ratings agencies flagging the amount of investment grade angels set to fall into junk status, the widening of credit spreads and the weakness in high yield seems appropriate. But this chart shows that the pain in credit is never far way from the European CoCo market, a reminder that the New Year will bring that annoying question regarding Deutsche’s coupon. 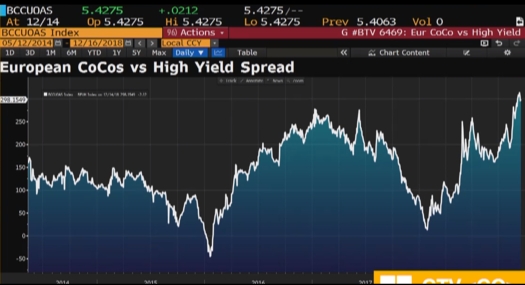 What changed for us last week

Two key events influenced our views last week, changing the probabilities we give to the spectrum of outcomes.

Other than sunrise events emanating from the US/China spat or Brexit, the main event this coming week is the Fed. We’d be surprised if they didnt’ use any calm in markets as an opportunity to hike rates, then flag an intention to revert to a “data dependence” into the New Year, with the door open to a pause in rate hikes as the balance sheet run-off takes hold and becomes their preferred method of policy “tightening”.

Of course, if the curse of “Black Monday” shows up ahead of the meeting, all Fed-bets are off, and their response can’t be forecast, at least by us. Let us pray.

The “planned” government shutdown in the US this coming Saturday, when the current spending bills expire, seems much less scary than previous scares. As with everything, frequency breeds familiarity and complacency. Nothing to add over this decent WSJ summary.

All in all, we remain convinced that major stocks can just as easily ride a short squeeze to new highs as plummet 1987-style.

For that reason we prefer the sidelines, feeling that risk taking is only for those with need rather than opportunity.

Semper fi until next week.

Pic of the Week

NB – these are the (inflated) opinions of the author, and are NOT investment advice.