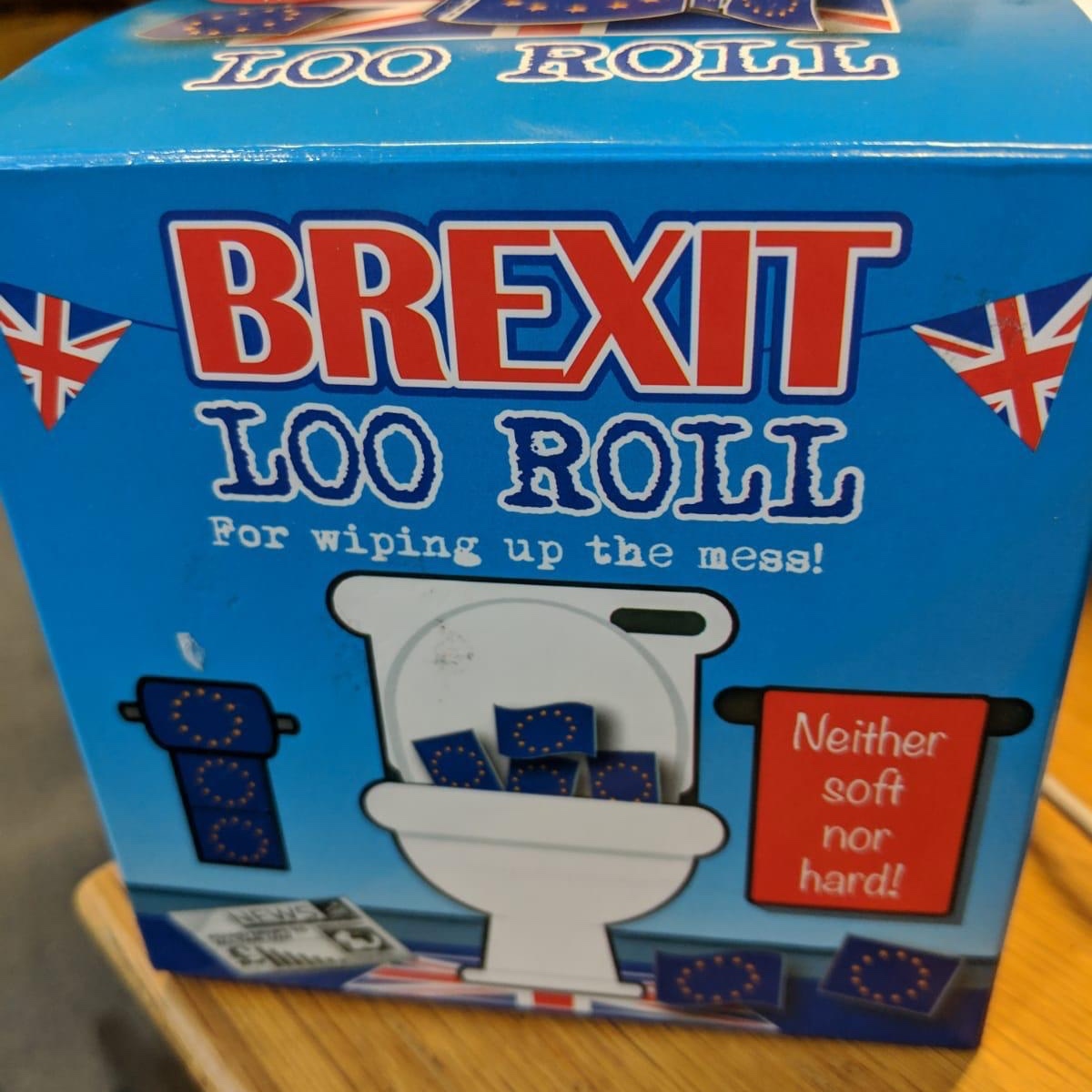 While too much has been said or written about Brexit already (especially by us!) the mere fact that the vote on PM May’s deal takes place (hopefully) tomorrow, it’s important to take a rain check on where we are. We remain convinced this is a major, perhaps even systemic, issue for markets and economies, as we side into the “buzzer” at the end of the formal 2 year negotiation period.

Based upon the comments from the swing votes within both main parties, together with the assurances of the Ulster Unionist party that it will vote against the deal (unsatisfied with assurance on the “back stop”) it looks like a resounding loss for May.

The rest of our comment relies upon this outcome. In the unlikely case that the deal wins acceptance, then we would change our minds completely and ready for a smooth Brexit in March, wherein the transitions phases will kick in (see below).

We will also start writing a letter to Father Christmas, in earnest.

The day after the fight before

Supposing May loses the vote, she has few options. Two unlikely options include she resigns herself as PM and forces a leadership challenge, or she declares the Government unfit and asks the Queen to find another PM and Government, and/or call a General election. While PM May has made such a grave error before, losing a handsome majority and initiating this whole chaos, it’s unlikely. But not impossible – beware.

Once it’s clear May will try to muddle through, threatening a hard Brexit as the only other alternative, we feel it’s likely Labor’s Corbyn finally follows through with his previous statement of intent to offer a Motion of No Confidence (MoNC) in the government, and the Speaker follows the new procedures and Parliament votes again, this time on the PM alone.  We discussed the procedure and “flow chart” here. The risk in the first vote is that enough Labour MPs vote to keep May. Given Corbyn’s reluctance to have the MoNC in the first place, he may not enforce the whip which would require Labor MPs to vote with the party. Remember, Labor could be torn apart by Brexit too, and may simply keep May in power to clarify the blame.

If the initial vote goes against May, then the risk becomes her not resigning. Recall this is not procedure, and if she digs in, forcing the 100 Tories who voted against her in the Tory party’s own vote of no confidence, to change their mind and save their skins, then it’s possible after 14 days are up, we go to fresh elections.

Should May resign, then the risk becomes that the Tories can’t find a PM sufficiently satisfactory to Arlene Foster. One that will make sure the Irish backstop does not remain in its current “flexible” form.

If we make it thought all those “ifs” then we find ourselves with the same government with a new PM – but still with the same “Foster Parent” in ultimate control of the UK’s destiny.

The hard or soft option.

So how bad would a hard Brexit, no deal outcome be?

No one really knows, and as this piece makes clear, most of the fear comes from ports clogged with perishable food, and manufacturers running through their “36 hours of inventories”.

But in reality, the reliance on “frictionless trade” and just in time inventory management is likely to be a lot less than feared, and as usual, companies, and consumers, will find a way. I’m always puzzled precisely why the removal of this cozy passport-free arrangement needs to suddenly require additional mass security and checking? The fear of criminal or terrorist behavior? Surely that is always there and the infrastructure to deal with it already works?

No, it seems to us that the real reason why this all matters is the possibility of reaping tax revenue. That would indeed require fresh infrastructure.

So, what if both parties, the UK and EU both allowed business as usual, at least in the form of a transition, similar to that which is proposed for financial services? The best short summary we’ve seen of these arrangements is here.

Indeed, on paper, the transition arrangements for financial services seem both flexible enough and adequate, at least as a plan to negotiate further. With the City of London and financial services contributing £75bn in taxes in the year to March 2018, continued resilience in the City amounts to covering 62.5% of the cost of the National Health Service.  Employing 3.4% of the UK workforce, contributing 6.6% of economic output and accounting for 10.9% of UK Government tax receipts, continued stability in UK financial services would provide quite a prop for the ailing economy. It would also provide room for the inevitable fiscal ease.

While the goods economy may indeed get bogged down in the hard-Brexit, there remains a good chance that services will cope a lot longer and help insulate the overall economy from the shocks.

Using the divorce analogy, while it’s cool to threaten loss of access to the kids, most divorces change the tune upon settlement, even if that settlement is without a divorce. Common sense usually prevails.

Why does all this matter? Because, simply put, we’re at the stage where the threat of chaos and carnage at both ends of the Channel Tunnel, is actually required to keep both sides even  thinking about negotiating. The idiocy of this whole fiasco is that, from a game theory perspective, it was in the interests of both parties to leave all negotiations until one minute to midnight.

Putting the “Xit” in Brexit.

So, what do we think will happen? Well for a start, we see PM May finally going within a matter of weeks. Who replaces her matters, and as long as it’s someone who cherishes the sanctity of Parliament, we see a hard exit as almost impossible. Instead we see the new leader moving towards a second referendum, albeit when all other options have been exhausted. This has been our view since Article 50 was initiated, and remains our view.

When might that be? It looks likely that a cooling off extension of three months would be optimal for the EU, leaving a new vote around June or July.

As to the impact on markets, after a brief but frantic rally in UK risk assets, in particular sterling, the reality that the UK economy is slowing quite fast should set in over the summer, and the rally should reverse. We covered this in detail here.

The UK’s fundamentals have deteriorated as the realities of Brexit have dawned on corporates and consumers alike. But the biggest risk remains the growing political tensions and economic weakness in Europe itself. To suggest that the UK is growing faster than the EU, and therefore has nothing to fear from Brexit, as Bill Mitchell (of the Economist) argues strongly here continues to ignore the realities of their near 50 year integration. In or out, divorced or just separated, the two economies rely heavily on one another. While both sets of monetary policy makers seem to have very little latitude to provide insulation from shocks, let alone stimulus,  both communities have their own currency, and the UK has latitude to reverse its recent austerity, and these options provide the best chance for both economies to cushion the twin crises that look likely to beset them – that of Brexit and a new EU debt crisis.

Steering away from the cliff, by ending austerity

The major European economies have little or no fiscal latitude, and any attempt to rectify excessive weakness in budget deficits has met with rapid civil disorder, as in France. With several countries up against the Maastricht bounds, fiscal policy can neither be eased nor tightened.

In the UK, the exact opposite is likely true. The UK has been imposing aggressive fiscal tightening since 2012, and most notably between 2015 and 2017, and set alongside a weakening personal sector and sluggish investment, the UK economy has shown remarkable resilience. The charts below, taken from the ONS, show the extent of the fiscal tightening. and the latitude to ease further. 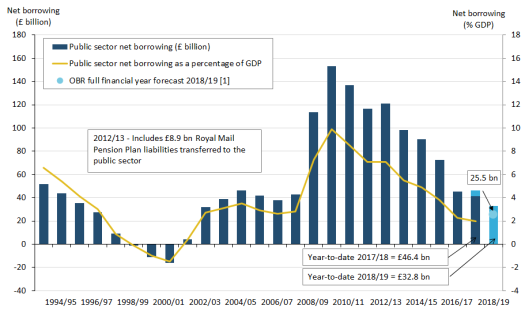 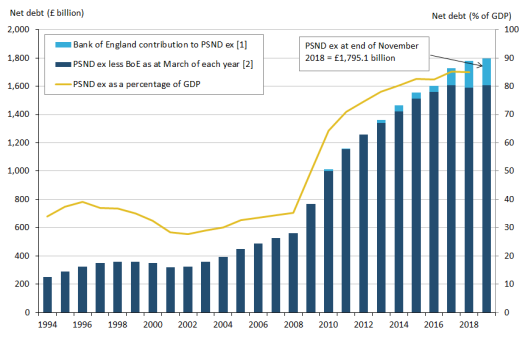 That resilience looks to have run its course, and now the uncertainty of Brexit is compounding the end of cycle weakness. We argue here that without fiscal stimulus coupled with greater certainty on Brexit (eg a second referendum which reverses the first result) a large and disturbing recession looks likely.

A tale of (more than) two cities

While we can see that the current transition arrangements and “no deal” emergency proposals should shore up the City of London for a year or two, it’s plain that Brexit has given the European financial centers the crack of daylight to begin to break London’s stranglehold. As Ruth Doubleday writes “In economic terms, we still don’t know what any future deal looks like, so we don’t know the full scale of the impact of Brexit. A shift of operations from the City of London to other European financial centers such as Paris, Frankfurt and Dublin are already underway and is being actively encouraged by EU authorities (and why wouldn’t they?) While the number of job losses to the EU are not yet clear, what is clear is that the impact will be negative for the UK. There is no upside of Brexit for financial services. ….. It is clear in the Political Declaration that the future deal will not include passporting in its current form. So, while the City may continue to generate tax receipts sufficient to fund more than half the annual cost of the NHS through the transitional period, this ability is only set to decline. The only open question is how quickly?”.

We think it’s even more complex than that, and much more concerning. We view Brexit not as an opportunity for Paris,  Frankfurt or Dublin to steal London jobs. Instead, we suspect this is an opportunity for global financial firms to replace City jobs with new technology and blame Brexit. The outcome for the UK is likely the same, but any benefits to Europe are likely much narrower. As blockchain and artificial intelligence take hold in finance, and services more generally, the trend started with Brexit is almost certain to propagate for many years afterwards, whatever the settlement (In or out).

We have argued throughout, that Brexit is merely a distraction from the true challenges all of these economies face – globalization and technology. The results of these forces will be emasculated by the political confusion of Brexit, but the hollowing out of the UK and EU economies looks set for take place. It’ll take historians many years to identify the true causes, while economists my never actually figure it out.

This coming year looks set to be a very tough one for the UK, whether Brexit is resolved via a second referendum (our 85% view) or lurches into some hard-form chaos (15% probability), and we remain convinced the property sectors are the indicators to watch, led by the commercial sector (as we wrote here) while prompt and aggressive fiscal easing could mitigate the deeper risks, preventing a recession and financial crisis.

Note – these are merely inflated opinions, and do not constitute investment advice.

2 Replies to “Brexit – May Day, May Day in January”