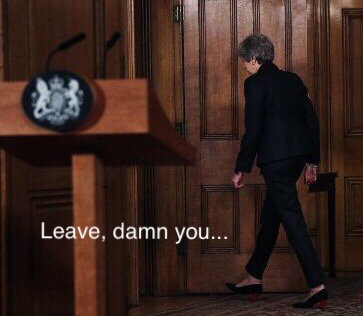 Latest betting seems to be that May’s deal will be voted on Friday and pass, such that UK will leave (and enter the transition phase) on May 22nd. Obviously that means PM May’s deal will pass before April 12th, thus allowing May to step down as leader.

May I please leave when I want you too?

Throughout this debacle we call Brexit, PM May has at least been the lodestone – she’s kept to her stated aims and resisted change at all points. She’s been nothing but consistent. Brexit means Brexit, and my Brexit or no Brexit.

Unlike every other politician involved, and most of those in the gallery sneering without power or responsibility.

The latest rotator being Rees-Mogg who did the full 180 on Monday and now supports (for the moment) her deal. Is he “tie-d” to the deal ? We think not, since his excuse for rotation seems to have a lot to do with college ties. See here

But PM May’s latest promise to leave looks to us to be simply upgrading “soon” (as she said after the leadership challenge – before the next election) to “sooner” – and in doing so, given the betting on full collapse of this govt is rising fast, she’s simply updating her resume for “events dear boy, events”. Some are even speculating what sort of employee she might make.

May Day, May Day in April?

Should she be able to leave when she wants to, conditional on the UK leaving under her terms, she will no doubt leave quietly. But who would take her place?

As we suggested here, the whole reason she remains in power in the first place is because there is no natural choice – exactly like Brexit – no one likes the menu.

leaves the country in the lurch floundering with a “Brexit in name only” – BRINO as many have nicknames it.

Is that really the FIN end of the cliff edge?

Well as we don’t see this outcome, we perhaps haven’t thought this through as well as the multiple commentators who have tied their school tie to this outcome.

But tomorrow brings the infamous MV3 vote – of sorts – that is intended to pass her deal and allow the UK to leave in May (and May in April presumably).

This is precisely the last ditch calamity we’ve written about, and as such, a failure to pass should bring serious market moves on Monday.

Levels like 6,500, about 10% off current, should become realistic on the FTSE if the deal fails.

At least the “dragon” never sleeps, and couldn’t miss the opportunity to get the last minute “warning” out there…

“No deal Brexit not priced by markets – ECB Draghi”

Either way, this we feel should be enough to scare everyone into ref2 and a stasis for the ever dead AND alive Schrödinger Brexit.

NB – these are the (inflated) opinions of the author, and are NOT investment advice